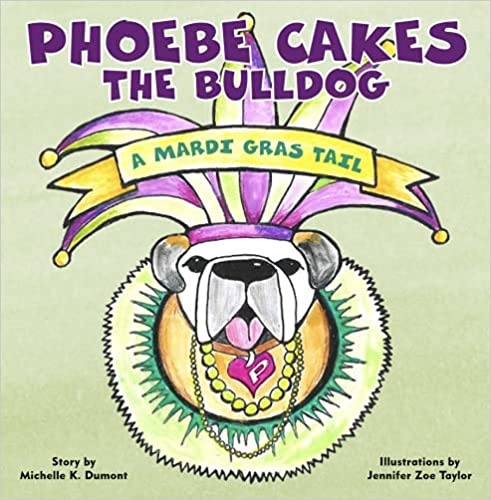 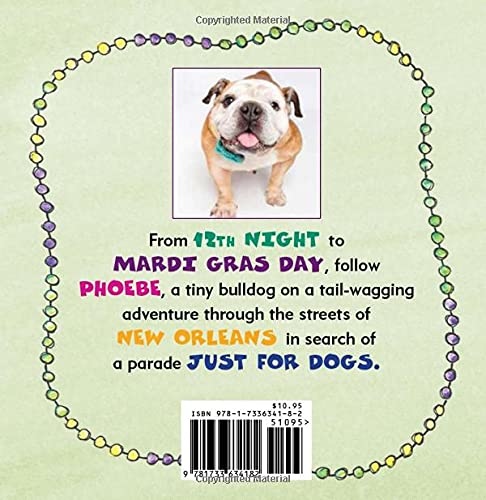 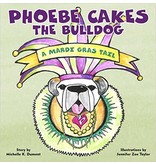 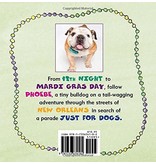 From Twelfth Night to Mardi Gras, follow Phoebe, a tiny bulldog on a tail-wagging adventure through the streets of New Orleans in search of a parade just for dogs!

Phoebe Cakes The Bulldog is a sturdy, 24-page board book that engages children with interactive search-and-find flaps on every spread. The dynamic illustrations and clever rhyming verses guide readers to discover the sights and sensations of Mardi Gras in New Orleans.

Join Phoebe Cakes, a special needs bulldog, as she searches for a Mardi Gras parade just for dogs. Ring in carnival season with a “Twelfth Night” celebration ride on the historic St. Charles Avenue streetcar.

Tour New Orleans neighborhoods and discover the spectacular house floats of Yardi Gras that began during the pandemic but are surely here to stay. Take time to savor all the King Cake flavors and just maybe you’ll find the baby!

Don’t forget to yell, “Throw me something mister, Throw me something sister!” and catch beads and other “throws” at every parade around the city. When Fat Tuesday comes to an end, yell “amen”! We’ll do it all again…next year!

This colorful book features flaps on every spread that engage children with a question and then reveal a surprise as they open the flap.

Add your review
0 stars based on 0 reviews 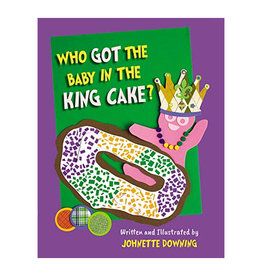 Whoever finds the plastic toy baby in their piece of king cake is obliged to host the next king cake party.
Who Got the Baby in the King Cake Book
$17.99 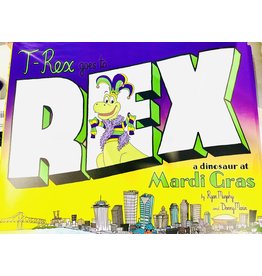 Have you ever wondered what a Tyrannosaurus Rex would do at Mardi Gras? Of course you have! Read this book and wonder no more. Join T-Rex as he travels to New Orleans for his very first Mardi Gras!
T-Rex Goes to Rex: A Dinosaur at Mardi Gras hardcover book
$21.95 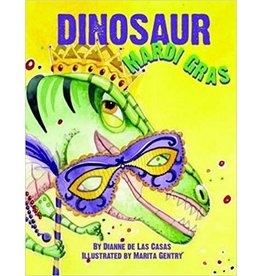 Get ready to stomp and chomp to that mambo beat!
Dinosaur Mardi Gras
$17.99